Grabowski has made mark in construction with Atlantic Infra. Now, she is refocusing business to ensure brighter future

By asphaltmasterFebruary 11, 2020Uncategorized
No Comments 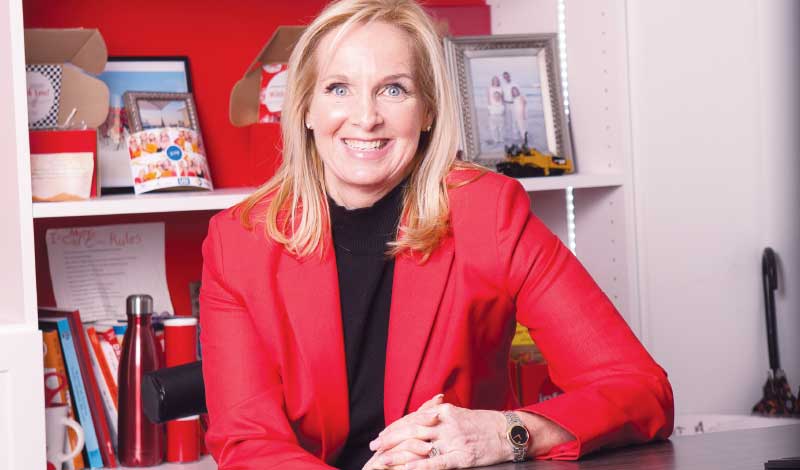 Marilyn Grabowski, president of Atlantic Infra, is refocusing her company after a recent reduction in workforce.

In fact, Atlantic Infra in Wall Township has grown more than two and a half times over the last five years, to become a more than $30 million company.

But now, after a recent reduction in her workforce by more than half, Grabowski is refocusing the innovative pothole repair and paving company to prepare for even more rapid growth.

“We’ll see growth from the onset, as this refocus will allow us to become a stronger union contractor,” Grabowski, president of Atlantic Infra, said. “We should be able to not only march, but run forward.”

Grabowski spent her entire career preparing herself for such entrepreneurial challenges.

After working for more than 15 years in pharmaceutical sales and training on medical devices, Grabowski was affected by a companywide layoff in 2000.

“I had just given birth to my second child and was working a reduced schedule,” she said.

Undeterred and ready to get her boots back on the ground, Grabowski said she was inspired by her grandmother, Florence DeRosa, who had started her own contracting firm to build residences in Bergen County at age 40.

Then Grabowski met her husband, Tom Grabowski, who was working for a construction company.

Atlantic Infra will employ nearly 45 at the start of the season in March.

“And, when I saw they had no marketing strategy, I saw opportunity in marketing the infrared technology,” she said. “(My) job (had been) to manage territories as though it were our own business, so I already knew how to be an entrepreneur.”

Grabowski had the business, marketing and sales skills necessary to make this happen, a STEM degree from Franklin & Marshall College in chemistry — and $100,000 in severance pay.

So, she purchased the first piece of equipment and started Atlantic InfraRed from a walk-in closet in 2002.

No job was too small and no town was too far, Grabowski said, as she focused on building relationships and opportunities.

“I went out three days a week to rally up customers, including engineers interested in infrared technology,” she said. “Plus, I made a major play at the New Jersey League of Municipalities to get close to decision makers, who would then request that utilities use the technology so that their roads would look better and last longer.”

Her strategy worked. Grabowski grew the business into three separate entities, moved them all into a trailer in 2012, and moved again to its current space in Wall Township in 2016 before joining the union.

“It (has always been) about educating people on why they would prefer the method that we use, (because) when they believe in it, they utilize it,” she said.

Atlantic Infra continues to work with a majority of the major utilities and municipalities in the state.

“They both want to leave the asphalt in better condition than when they started repairs,” Grabowski said.

Since 2002, Atlantic InfraRed has used infrared technology to provide a quicker, permanent and seamless solution for potholes that takes less labor to achieve positive results.

“The only barrier is tradition,” Grabowski said. “It’s difficult to get people to change their ways.”

Atlantic Infra now has the largest infrared fleet in the world, serving customers such as the largest gas utility in northern New Jersey.

Then, there is Atlantic InfraStructure, which since 2009 has provided large-scale milling and paving services, especially in safety-sensitive areas.

But the company is currently in the process of disbanding Atlantic InfraTrac, which since 2011 has performed accurate locates for underground utility services.

The team had 70 dedicated employees.

“We had a huge footprint in the state of New Jersey,” Grabowski said. “But, when the state increased the minimum wage and passed legislation regarding paid time off, that truly impacted the pool of employees for us to hire.”

Then, Atlantic InfraTrac lost its major contract with a large telecommunications company entirely based on price, she added.

“Now that segment of the marketplace was going to be too challenging,” Grabowski said.

Despite the difficult loss, Grabowski said it was a successful learning experience.

“Running this business taught us how to better scale, how to manage human resources, and how to create and follow processes,” she said. “We’re now just going to stick with what we’re really good at, which is paving.

“That’s what we’re looking forward to.”

While it employed nearly 120 last summer, Atlantic Infra will now employ about 45 at the start of the season in March.

Grabowski said this team will be laser-focused on returning to the company’s roots.

“New Jersey infrastructure is extremely busy right now, and we look forward to being a bigger and stronger part of those improvements in the near future,” she said.

The goal, Grabowski added, is to double in size over the next five years.

“And to be the premiere diverse choice in the utility environment,” she said.

Marilyn Grabowski is a skilled and passionate negotiator, which was readily apparent as she navigated a deal worth hundreds of thousands of dollars.

“Never be the first to speak,” she said, before requesting a thorough reasoning of numbers from a vendor and taking her time to craft an appropriate response.

Tough, but fair, Grabowski knows her numbers, her business — and the right deal for her. If it’s not? She’s unafraid to look elsewhere.

“Do your research, and keep your cool,” she said.

After heavily investing in operations staff nearly two years ago, Grabowski said she’s no longer beholden to a to-do list or never-ending emails.

“Now, it’s really all about strategy and helping our people to grow,” she said.

That means teaching the next generation of employees how to negotiate, too.

“I spend time talking with women, especially, about conflict in the workforce and how to deliver their message in the right way,” Grabowski said. “The way you communicate makes a difference — it’s not always what you say, but also how you present it.”

Finding talent and labor is still a struggle in a state with a high cost of living, Marilyn Grabowski said.

“But we are extremely proud to be a diverse company located in New Jersey,” she said.

As a current member of the Women Presidents’ Organization and advisory board member of the Wall Business and Finance Academy at Wall High School, as well as a past member and board president of the Board of Public Utilities Supplier Diversity Development Council of New Jersey, diverse recruitment and continued growth and training is always top of mind for Grabowski.

Last year, Atlantic Infra hosted seven interns — three from the Construction Industry Advancement Program of New Jersey, one from WBFA, one from Franklin & Marshall College and two referrals from both WPO and the Atlantic Infra board.

“For example, our project manager, Nicole Federico, joined us through CIAP as an intern from New Jersey Institute of Technology,” Grabowski said. “She received her degree in construction management, began working full-time with us and is now pursuing her master’s in industrial engineering.”

Everything at Atlantic Infra, from the office to the vehicles to the company uniforms, is an iconic shade of red.

“When customers see red as they pull up to construction sites, there is no question in their mind that these are the folks who want to do it right and provide quality service,” Grabowski said.

Grabowski also learned to stand out by sending valentines to current and potential customers instead of holiday cards.

“Christmas cards simply get thrown into a pile,” she said. “But our valentines are a huge part of our marketing and the highlight of our year because Valentine’s Day is also our business anniversary.”

Connect with Marilyn Grabowski at: contactus@atlanticinfra.com or 732-899-8994.